The seeder propashny SUPN 8, SUPN 8-01, is intended for dotted crops of the calibrated and not calibrated sorted seeds of corn, sunflower, a castor-bean tree and sorghum, and also seeds of fodder beans, soy, haricot and lupine with simultaneous, separate from seeds, introduction of mineral fertilizers and a prikatyvaniye of the soil in rows. SUPN 8-seeder creation of stable depression in a pneumatic system is provided with SOUP 02.000 adaptation - the gas-jet compressor - the ejector. SUPN 8-01 seeder - creation of depression is provided with the fan with the drive from tractor VOM - 540 rpm. Seeders of SUPN 8 are aggregated with the YuMZ, MTZ-80/82, T-70S tractors. The principle of work of a seeder of SUPN 8 By means of the mechanism of transfers from basic and driving wheels is carried out rotation of the sowing disks and spring screws of tukovysevayushchy devices. The vacuum in a cavity of a cover of low pressure of the sowing seeder device SOUP-8 is created or the fan given to rotation from tractor VOM, transmitting rotation through the driveshaft or by depression from exhaust a tractor by means of a special pipe - the ejector. For control of size of discharge on the fan or on exhaust the adjusting valve with the membrane draft gage showing pressure is installed. Seeds stick to the openings of the rotating disk which are in a discharge zone and are transported from an intaking chamber in a dumping zone - atmospheric pressure. Removal of the excess seeds which stuck to openings back in an intaking chamber is carried out by fork probes - tripper devices, the seeder of SUPN 8 installed in the intaking camera of the device between which at rotation of a disk there pass the seeds which stuck to openings. In the lower part of the device upon transition of openings from a depression zone in a zone of atmospheric pressure seeds on one disappear from an opening and keep within on a bottom of a seed bed, an educated seed heel of a soshnik. Spring screws of the tukovysevayushchy device of a seeder of SUPN 8 with the left and first navivka give fertilizers from the bunker in to tukoprovoda. Lenses, making oscillating motions at output windows of funnels, disperse a stream of tuk, providing a uniform stream in tukoprovoda, and then in the furrows formed by tukovy heels of soshnik. Zagortach of a seeder of SUPN 8 close the soil of a furrow with the seeds and fertilizers laid in them. Then the arriving wheels which are for zagortacham condense the soil over furrows, creating contact of seeds with the soil and conditions for pulling up for them of a vlagimass, kg of 1240. Technical characteristic of a seeder of SUPN-8: 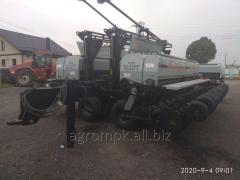 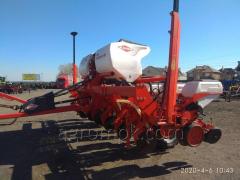 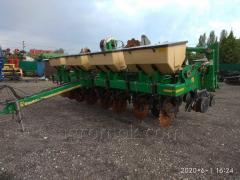 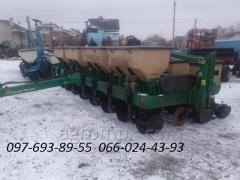 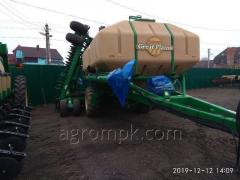